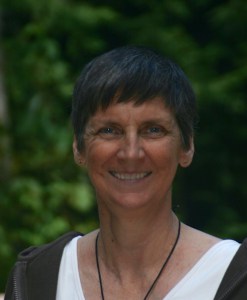 I am X-Pat, a feisty globetrotter. Teacher, writer, coach, speaker, and trailblazer with the down-to-earth, open-armed persona of The Heartland and a European twist. I have lived in four different countries, speak three languages and raised two bi-cultural kids with one très bon Frenchman. My passion is inspiring courage, breaking barriers, and creating connections.

Down and out? Hopeless and helpless? No matter where you are in your journey, my stories can help pick up your spirits, make transitions, gain new perspectives or just escape the daily grind. I encourage people to fight back when life throws a hard punch.

I should know; my life has been one big battle. I broke gender barriers in sports in the seventies, earned the first women’s basketball scholarship in Illinois and played in the first women’s professional league in the United States. When that went bankrupt, I headed overseas to Paris. When the French Federation banned foreigners in the league, I crossed the border to Germany. When a car accident ended my athletic career in my 20s, I became a writer. But first I had to learn to hold a pen again.

Enduring chronic health challenges in adulthood, I know all about picking up the pieces, starting over and staying in the game. After teaching and coaching in international schools for over 3 decades, I am starting a new gig. Half here half there, I am literally living between worlds bringing love, laughter and uplifting tales from the foothills of the Swiss Alps to the flatlands in the Land of 10,000 Lakes.

I offer humor, hope, inspiration, travel, and cross cultural insights to your doorstep with a click of the hand. Give a holler or yodel if you are ever in my neck of the woods or shoot me a text message. Hope we can connect.