Even though Biden was officially announced the 46th President of the United States, I remain suspended in space. The free floating anxiety I have felt since the Covid outbreak last March lingers because Trump refuses to concede. In our democracy! Instead he demands vote recounts, shouts election fraud and continues to give free license to supremacist white groups and other dangerous organizations. Militias pop up across the country, protests break out and even though I live 4,000 miles away, I am not sleeping.

Every national news channel here covers the US election in the UK, France, Switzerland and others. As if addicted, I read and reread the headlines - NBC, CBS, ABC, CNN, USA Today. Tracking results is even more stressful than listening to my daughter’s former college basketball games on the radio with leads changing back and forth. The stakes are so much higher. My stomach roils. I feel nauseated. I wait. I pace. I WhatsApp family. I hold my breath.

“Biden won, but I am not celebrating until Jan 20 when he actually takes office,” my son says, “cause Trump is acting crazy dangerous and making everybody nervous.”

The election’s result makes me feel proud to be American and especially proud to be a woman. 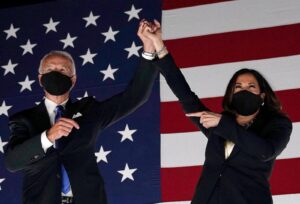 “While I may be the first woman in this office, I will not be the last,” said Kamala Harris, an African American and Indian American, when she made history becoming the first female VP, "Because every little girl watching tonight sees that this is a country of possibilities."

"And to the children of our country, regardless of your gender, our country has sent you a clear message: dream with ambition, lead with conviction and see yourself in a way that others might not see you, simply because they've never seen it before. And we will applaud you every step of the way.”

I was once one of those little girls growing up in a sea of white males trying to do something girls never did before, facing discrimination every step of my journey as a pioneer in women’s basketball. When I moved to Europe to pursue a career as a female pro, I was accepted in Europe but not my homeland. I never overcame the feelings of being shunned.

That was no excuse, but it was a great part of the reason I never registered to vote as an American citizen living abroad. I felt left out of the dream. Still I defended my country every time it was criticized and criticized we were, but never so greatly as in the last 4 years when Trump destroyed international relations with European Allies, pulled out of international organization and destroyed everything that represented the very foundation of US democracy, human decency, world health care and respect for our fellow men. I felt ashamed.

But in 2020, I knew that I could no longer feign indifference and abstain. I had to 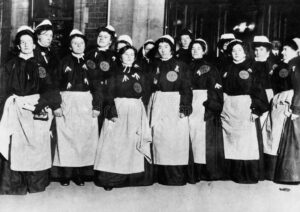 register and vote. As I went through the necessary paperwork, I applauded those suffragettes who came before me and fought so hard to earn the right to vote.

With great trepidation I marked my ballot with the proper pen, checked and rechecked addresses and mailed it to the Whiteside County Courthouse listing my childhood home as the last place I lived in the USA 40 years ago.

On election day, I woke up at 2 am European time to look at the polls. For the next 72 hours I switched between news channels all day checking the results while my husband crunched numbers and tried to assure me Biden would win.

When Biden’s victory was announced, family in the states called me on WhatsApp, their eyes filled with tears, their faces evoking joy.

All around the globe world leaders sighed with relief expressing congratulations to Biden and anticipating stability back in the White House.

Paris mayor summed it up best: “Welcome back USA.”

During this unsettled time of global pandemic spinning out of control, the change of American leadership has restored hope not just for Americans but also all Europeans.

And Biden’s victory and the election of the first female Vice President gave this little girl a voice after all these years.