Skip to content
Sixty five years after the anniversary of Anne Frank’s death in Bergen Belsen,  the young girl remains a teenager forever, her memory kept alive by the millions who  read her story.
My 9th grade English class try to comprehend the atrocity of world history. We not only analyze the Holocaust ; we also visit a concentration camp. « It is so depressing, » Invariably students say, « why do we have to study. This ? »  Yet, painful as it may be  a young minds, we must bear witness  to the past. 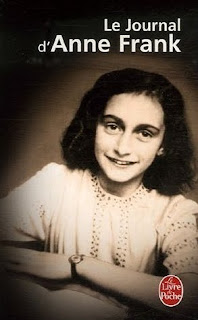 I told the class that they could ever play a game by my rules or  take a test. « The game starts when we walk outside this door.  No talking.  If you speak, you will be sent back to the class room.  Bring your journal and a pen; leave everything else in the room. »
Single file, 18 students followed me down the hall, up two flights of stairs and down a narrow passageway under the sloping roof of the old building.  I unlocked the door to an empty room, no bigger than a boxcar.  When I close the shutters on the dormer windows, I say, »This is like the black out of houses during WWII bombings. We are in the secret attic of the school.  Write a descriptive piece using all five senses.  You can imagine you are writing a journal entry during the Holocaust, you can invent a story of the Swiss hiding from their French neighbors, former oppressors, or you can pretend the teachers turned against students and I am  hiding you to save you from being taken away.  You have to survive one class period in without a sound. »
Students slouched against the sloping walls.
A couple boys scuffled  over the three wooden chairs.  Others lay on the floor.  Only the rustle
of paper and pens scratching across the lines breaks the eerie silence.  No one spoke.  Even my hyperactive drummer boy stopped tapping.
The air was hot and stuffy from too many bodies crowded into too small of space, squeezed
so close together our elbows touched. I felt like I was suffocating.
My thirteen-year old students were the same age as Anne Frank when she went into
hiding.  How different their lives?  Affluent kids from privileged backgrounds dressed in designer jeans and shirts, feet clad in various name brand of tennis shoes in rainbow colors.  My six girls, a minority, stopped writing occasionally to brush their long, luxurious hair from their bright, inquisitive eyes.
I glanced around the room at my students -American, British, Czech, French, German, Guadamalean, Indian, Italian, Japanese, Scandinavian, Swiss , Trinidadian, -not long ago we were divided by ideology in a world war.  Allies vs. Nazis, the axis of evil, set to annihilate all but the Aryan race. Today we are classmates and friends at an international school without walls in Switzerland, a neutral country without borders.
« I feel locked, not in a room, but within myself, » one Israeli student wrote. « Even though we are not alone without communication we’re not together. The intense atmosphere of silence can quickly make the toughest mind fragile. »
« I feel oppressed. » wrote another.  « My back hurts  from sitting on the floor.»
I cannot help but compare these kids to those of Anne Frank’s time or to my generation coming of age at the heels of the Civil Rights and Women’s movement.  I pods, I pads, Internet, cell phones,
television, today’s teens connected 24/7 by instant messaging and the world wide web.  When was the last time these children listened to silence, turned out the universe and tuned into the self ?
These multi cultured, multi ethnic, children are our future.  They are the ones who will stop nuclear war, negotiate peace, end terrorism, prevent oil spills and contain other man made disasters with more cooperation, better technology, brighter minds.
And I the aging teacher will become a shadow of the past, a faded memory of an era when I
tried to change lives  the old fashioned way, one idea at a time.