As an international teacher living in Europe, though I had spent summers Up North, I never had the opportunity to witness Wisconsin’s autumn foliage. Seeing the leaves turn colors was one of the first things on my “to do in retirement” bucket list.

From our cabin on a lake tucked in the woods of Central Wisconsin, nature offered an stunning show. Each day as leaves turned red, yellow, orange, amber, and gold I became more greatly enamored with the Northwoods.

“The trees are so beautiful!”

“Oh you haven’t seen anything yet,” my dad told me.

Then almost overnight, it was as if an artist spilled primary colors on a green canvas, creating a new panorama. Red sumac, orange maple, yellow birch, and fir, spruce and pine in every shade of green etched against a baby blue sky made me long to paint like my dad and grandma. No words could capture this radiant sight.

Now I understand why people plan holidays around the peak foliage week. As I drove south on route 45 from my doctor’s office in Eagle River, I stopped the car to shoot photographs of lakes – Pelican, Otter, Townline – along my route. Then I finished my tour on foot hiking around the western shore of Summit Lake and to the end of the road towards Upper Clear Lake.

My favorite childhood haunts were transformed into a riot of color. The sun, peeking from behind the clouds, cast a spotlight as the leaves burst into flaming glory, fluttering to the ground in their final dance.

While the wind whistled through the pines, leaves like giant, colored snowflakes spilled out of the sky carpeting the dirt roads in calico.

I never dreamed that the event was such a drawing card. My neighbors had friends coming to see the colors, hoping they could time it just right. Every year, experts try to determine the dates of the peak foliage for tourists to map out; I followed the foolproof advice of the Wisconsinite next door.

“Never fails,” he said, “colors change around my birthday. End of September.”

As the days grew shorter and the weather turned cooler, I wanted to prolong the show by catching the leaves before they landed to magically hold them on the trees longer. But Mother Nature is a fickle friend with a mind of her own. Part of the nature’s majesty is her fleeting quality.

As I walk in the woods, I gaze upward toward the treetops as the leaves snap, crackle and pop under foot. Or I sit on the dock watching the clouds swirl in the sky above while the trees reflection in the still, blue waters creates a multi-colored collage like an impressionist’s painting.

With the lighting and color changing every instant, I stare at an unfolding pageant, knowing that this beauty queen will strut her stuff, and then disappear in the blink of an eye.

But take my advice come next September; be sure to head north on Bob’s birthday. 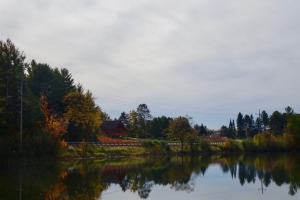 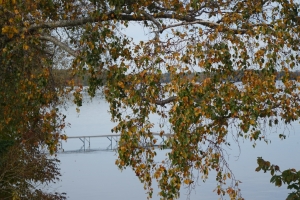 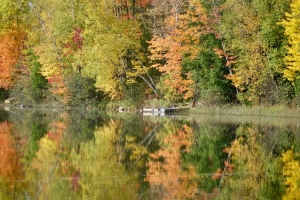 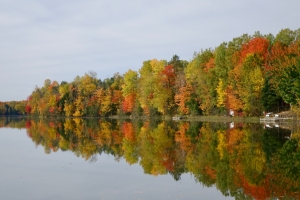 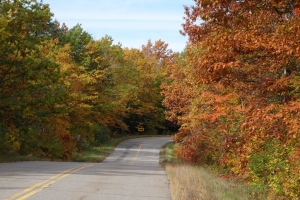 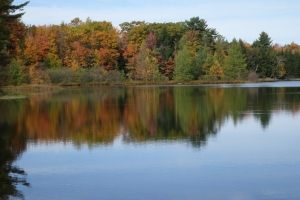 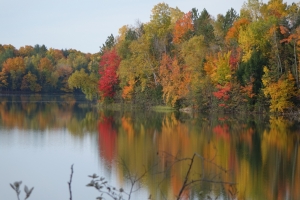