Ten years ago today, our sense of security was shattered instantly – the time it took passenger jets controlled by suicide bombers to crash into the Twin Towers, the Pentagon and in Pennsylvania.

It was one of the moments in history where you will always remember what you were doing when you heard the news.  When I arrived home from class, a friend was standing in my living room, her eyes glued to the TV screen. “Oh my God!” she cried, “The world is ending.”

I stared at replay of the film footage of planes crashing into the World Trade Center disintegrating 110-floors of metal and concrete, leaving 3051 children without a parent, and destroying the lives of thousands of families.

Terrorism. Live. Direct. In our homeland. At our hearth. In a heartbeat.

Suddenly we are all thrown into a real life horror show.

Yet no matter how many times we heard and saw the televised broadcast, we remained frozen in disbelief.

Even though, I lived far away in Geneva, home of world’s greatest peacekeeping organizations, and in a safe environment in a neutral country, the news stunned my international community of globetrotters. That year, my English class students at a Swiss international school wrote to the children of the UN school in New York, whose students lost family in the bombing.

Today, a decade after 9/11, my new students can’t remember a world without terror. They all know someone who knows someone, who was at the wrong spot at the wrong time in Bali, Jakarta, London, Paris, New York.

Today, even the most seasoned travelers step on the plane with trepidation. And anyone with a conscience wonders, what kind of world are we leaving our children? A world where commercial flights become deadly human missiles, where buildings dissolve like sand castles in the storm, and where innocent lives are annihilated in the blink of an eye.

The Ground Zero monuments, museum and 10th anniversary commemorations offer a tribute to the families of victims of 9/11 and to the American spirit of resiliency. As we take a moment of silence to reflect and honor the men and women who perished during the attack or rescue mission, may be we also say a prayer for those people of other lands who have also lost loved ones in the fall out of terrorism.

One of my former students was 12-years-old when her mom died in the bombing of the American Embassy in Nairobi. She wrote about it in class.

“When they told me, I was so upset I tried to run through a glass door. Now I write until my fingers bleed.”

Alone at night we still shake, terrified and powerless to curtail the madness of our 21st century world; together in the light of day, we stand tall and reach out in small steps. Healing begins in our homeland, at our hearth, in a heartbeat.

From Wengen, to Mürren, from Evolene to Kandersteg or Ovronnaz, Leukerbad, Zermatt, Crans-Montana or Nandaz, take a look at Switzerland’s wonderful scenery. Enjoy !

Switzerland could win awards as the tidiest nation on earth.  As a compact country, the Swiss are born with an extra chromosome, a clean gene, to help conserve space. The streets are so sanitary, you could  eat off the sidewalks. I have never been a neat freak, but I have adopted a few helpful spring cleaning tips from our European neighbors.

That is how my parents and I co existed during my adolescence. Consequently, I grew up serenely in comfortable chaos as a cellar dweller and only had to clean my room semi annually when the basement flooded.

Well, that was an interesting voyage. Round trip to nowhere. We left the house before daybreak and ten hours later, returned home in the dark again. We never left the airport, yet felt like we’d travelled for weeks. Since most European countries lack heavy snow removal equipment even a couple, little snowflakes creates huge havoc on the entire continent.

First bad omen: our taxi got stuck at the stoplight at the corner of our street. While our wheels spun on a patch of ice, a Renault Scenic smashed into the back of a Volkswagen Passat at the adjacent stoplight. Fifty yards further, a Mercedes slammed into the stoplight on the overpass knocking out the traffic signals.

In bumper-to-bumper traffic, we crept toward the airport. As soon as we arrived at the check in gate, a voice announced on the public address system, “Due to inclement weather, the Geneva airport will be closed until further notice.”

Ever optimistic, KLM personnel insisted we check our bags and pass controls to wait at the gate, just in case. But as soon as the Geneva airport reopened, the Amsterdam airport closed. We counted as one after the other flights across Europe to London, Paris, Frankfurt, Stockholm, Madrid, and Moscow were cancelled on the departure board. Our flight was rescheduled for noon; fifteen minutest later the red sign popped up, “cancelled.”

Luckily, Geneva is a small airport, so I felt at home in what turned into a mini reunion of the international school. All morning, I chatted with a colleague whose flight to London was delayed. In the afternoon, I caught up with a couple of 12th grade students who were booked on that same ill-fated, KLM flight. We waited for rerouting in a line that crawled forward a foot every fifty minutes. After four hours, we finally reached the rebooking counter, and I offered hopefully. “We could fly to Chicago instead of Minneapolis.”

Fat chance flying anywhere. During the Christmas holidays, flights worldwide were over booked. Forty-five minutes later the airline agent suggested, “Sunday, we have space on a flight to Paris with a stop over in Washington, then Minneapolis.” I collapsed on the counter!

“Pleeeaaasssee, I have health problems, can you recheck for a more direct flight?”

By then, I looked like I rolled under a cement truck, so she searched the computer screen again. A half hour later, she found a Continental flight to Newark then on to Minneapolis.

Last leg, flag down a taxi and head back to our own bed. Passengers across Europe slept the night in the airports. Since snow is a natural phenomenon, the airlines aren’t responsible for providing meals or overnight accommodations. It could be worse. In light of everything else that could go wrong in life, it is ONLY a cancelled flight. And when it snows, it is best to be stranded at home.

After the taxi dropped us in front our snow covered house, I discovered students had left a bag of homemade chocolates and a bottle of wine on my doorstep. There is a God, after all.

Bonne nuit. But will I sleep? Yikes, in 48 hours, I am flying over the Atlantic again!

Sounds crazy, but the Genevians go gaga over L’Escalade, a tradition commemorating Madame Royaume’s famous soup that saved the city from the Savoyard invasion in early hours on December 12, 1602.

Genevians held off the Duke of Savoy’s invading forces with a little help from a housewife. According to legend the night guard, Isaac Mercier, rang the church bells alerting the local militia. But the real hero was Madame Royaume, mother of fourteen, living above the La Monnaie town gate. She poured a pot of scalding vegetable broth over the ramparts. The heavy cauldron hit a Savoyard’s head, killing him as he was scaling the wall. The commotion spurred the residents to action. Tables, chairs and other pieces of furniture flew over the wall that night as the Genevians fought to maintain their freedom from Savoyard rule.

On December 4, the festivities kicked off with the 33rd annual Escalade Race where over 22,000 participants ran or walked four miles up and down Geneva’s snow covered, cobblestone streets.

During the weekend of Dec. 10-12, the prestigious Companie de 1602, the society founded in 1926, organizes one of the most beautiful historic events in Europe attended by 80,000 visitors. The highlight of the fight for independence over 400 years ago is three-hour torch lit parade led where 800 members in period costume re-inact the scene in Geneva’s Old Town. Musketeers, pipers, horsemen, drummers are accompanied by fire crackers and gun salutes.

Though I have smashed open a chocolate pot or two as tradition demands, we never fully joined the festivity of throngs of people crowding Geneva’s streets. Yet, I can’t help but savor the moral of that little Swiss story. Supermom, Mom saves the day again. 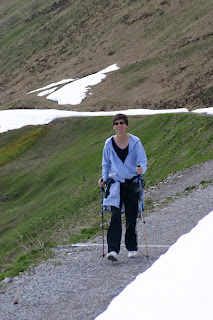 When I was growing up, I abhorred walking. Walking was too slow, too boring, for old people. I would bike, run, skate, even parade around the block on stilts to reach my destination. After a car accident ended my athletic career, I aged overnight. Forced to give up the pavement pounding I once loved, I concentrated on being able to put one foot in front of another and walk again.

In the beginning, I still hated walking, too slow, too boring, for old people. But now that I am old people, I have learned to appreciate it. Europeans helped me acquire a taste for walking. My German friends insisted on “spazieren gehen” through the woods surrounding Marburg. In Paris, like the French, I escaped my tiny apartment by heading outdoors, rain or shine, to a “promenade” in the park. In Switzerland, walking is as natural as breathing, especially in this nation of hikers, where every mile is beautiful.

In our techno, fast-paced, modern world, walking has become a lost art. Yet walking, which combines fitness, relaxation and meditation, is the safest sport. It costs nothing, wastes no energy, burns calories, builds muscle, fights fatigue. When I feel anxious, angry or depressed, I walk until worries slide off my shoulders.

I step outside my door into orchards and vineyards on the fertile slopes above Lake Geneva. While the sun slinks behind the Jura Mountains over my right shoulder, light shimmers around the white-peaked Mt Blanc to my left. The fields flame in amber, gold, rust of autumn marking the harvest in earth’s last hurrah before lying fallow for winter.

Walking forces us to slow down long enough from our hectic lives to appreciate the beauty of the moment, to take stock and count our blessings. Even though I live thousands miles from loved ones, I picture them walking in their daily lives. My sister paces around Yorkville’s newest subdivision at dawn, my daughter strides the halls of Minneapolis hospitals during morning rounds, my parents meander around Northland Hills mid day, my son dashes through Macalester quad to ball practice early afternoon, my niece marches in the band across Shaker Heights football field after school, my sister and brother-in-law stroll oak-lined streets of Golden Valley hand in hand at dusk.

Somehow when I walk, I am closer to family, matching each footfall step by step round the clock. Every hour of the day someone I love, somewhere, is walking to work, school, or practice.

I once dreamed of running marathons and skiing mountains, alas injury and illness prevented those goals. Though each year it is harder to roll out of bed, instead of lamenting what I can’t do, I focus on what I can do – walk. No matter how badly the rest of the day has gone, I am filled with wonder and wellbeing. Suddenly all is right with world.