Forty years ago, my little sisters made history and on April 4, 1977 newspaper headlines read “Sterling High Girls win first ever-state title over 7,000 greet Illinois number one basketball team.” Five years after Title IX passed into legislation mandating equal opportunities for girls in all publicly funded schools, a new generation was born. While our country was struggling with civil rights and gender equity issues a small town team united blacks, whites and Hispanics in one dream – a state championship.

If I close my eyes, I can still see Marche Harris pumping her fist in air after a break away lay up, Fran Smith with her wicked ‘fro soaring at the jump circle, Dawn Smith grabbing weak side boards, Jojo Leseman, running the court like a platoon captain in fast forward, freshman, Amy Eshelman gliding the baseline. And my sister, Karen McKinzie, standing at the line swishing another free throw. Harris, Smith, Leseman, Eshelman and McKinzie names that have marked SHS record books for years.

An odd trio of coaches, Jim McKinzie a retired boys coach, Sue Strong a GAA coordinator and Phil Smith the first African American teacher in the conference fought behind the front line to make sure female athletes were granted equal rights at SHS in those crucial years after Title IX. Before anyone dared to utter words like racism or sexism in public, they shaped a team far ahead of its time indifferent to gender or race. That group of unassuming girls enchanted an entire community. Part of the magic was their cohesiveness. No divas, no superstars, no drama queens, just selfless teammates who knew that they were stronger together than they could ever be alone.

It was too late for me. A 1975 SHS graduate, I became a Redbird and moved to Illinois State University where the first girls state tournament was held on my new home court. I watched with pride from the bleachers of Horton Field house as my little sisters made history under my father’s tutelage.

“What stands out most was how this team brought the community together,” he said reminiscing, “Nothing like it before or since. The Golden Girls were goodwill ambassadors for Sterling, a place no one heard of before was thrown in the limelight. When we returned as state champions, we were wined and dined like celebrities.”

Forty years ago, we had no clue that the old Golden “Girls” would bear daughters who would one day be recognized as Golden Warriors. All we cared about was finally being allowed to play the game we loved. Do the girls that play today know how lucky they are to compete on center court wearing fashion’s latest apparel? To prepare before games in weight rooms and repair afterwards in training rooms? To be immortalized in a state of the art Hall of Fame room? 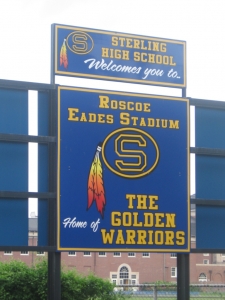 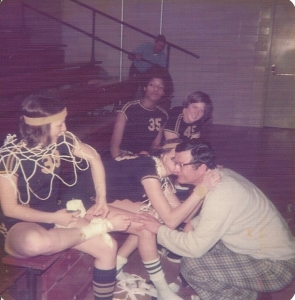 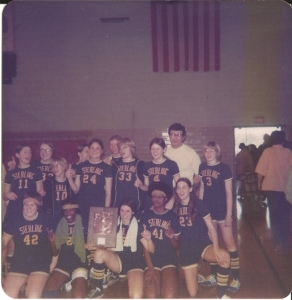 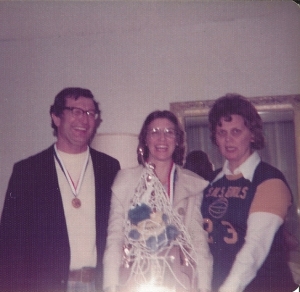 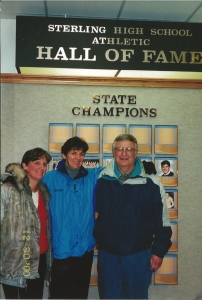 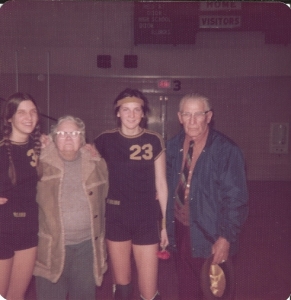 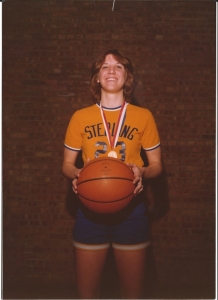 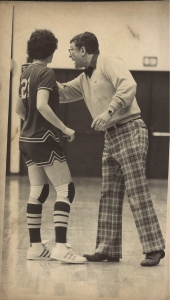 Stop by the open house at Woodlawn Arts Academy on Friday April 7 from 4:00-7:00 to salute that first state championship team and their coaches. Tip your hat to those pioneers who grew up in flimsy, canvas shoes and one piece gym suits, who played ball when no one was looking or worse yet when people looked and laughed. Pay tribute to those women who gave their heart and soul to dreams that no one understood, dreams that became our daughters’ reality.

When you sink a jumper and drive the baseline young blood, hear our stories whispered from the rafters. Walk tall, be strong, be brave. Be proud of your past, Golden “Girl”. After years of battle, it’s an honor and a privilege to be called a Warrior.

A chapter of my memoir is about the 1977 state championship team.