As if enduring chemo, without the cancer, I slipped off the planet into a free-fall spinning out of control. Out of commission, I disconnected from the real world incapable of answering email, writing blogs, telephoning friends. It was all I could do just to survive another day.

I feared going out in public because I could no longer trust my body. Dodging the throng of shoppers at Costco, I darted towards the nearest bin bag and doubled over heaving at the end of the fresh cut meat aisle.

At times my heart raced and I felt breathless. Other times I was dizzy and nauseous. In my worst moments I puked, barfing up breakfast or lunch. My entire existence became limited to timing my next medicine dosage and figuring out what I could eat, when and how to keep food inside.

As the days dragged on, my body shut down, so did my brain. Like a wounded, ol’dog, I wanted to drag my weary carcass off to a dark corner to lie down and die.

What precipitated this spiral of descent? In July I began a treatment to fight parasites in my blood, another evil component of my multi system inflammatory disease. Protozoa, unlike bacteria, are the same cell type as human cells. Antibiotics can differentiate better between your cells and bacteria cells, but anti-protozoan meds will also effect your own cells. Consequently, the most effective medications are extremely difficult to tolerate creating a chemo-like effect.

First came the shakes, queasiness, fatigue, disengagement, disassociation then the vertigo, nausea, vomiting, shortness of breath, and severe orthostatic hypo-tension. Rising from a sitting position, made me faint. I was so winded going up the stairs I had to sit down every other step to catch my breath. Walking up a slight incline left me doubled over gasping as though I had just run a mile.

I knew something was seriously wrong for even in my favorite place among my favorite peeps, I felt despair. Mere communication required too much effort. I didn’t want my family to worry, so I tried fake it, but fooled no one.

“What is wrong mom?” my kids asked. “You aren’t talking and you always have something to say.”

The weird plethora of symptoms made me feel like I was going crazy, but I did not look sick until the weight dropped – 15 pounds off my lean 5’10 frame. I begged my doctor let me stop the meds for a few weeks, so that I could regain my strength and sanity in a mini break from the antibiotic, anti parasite, anti fungus regime.

Within a day the nausea subsided and I could take in calories. The level of fatigue and dys

A part of me felt angry for the all the sublime summer days I’d lost while curled up in a dark room clinging to the sides of bed to keep me from spinning off earth. 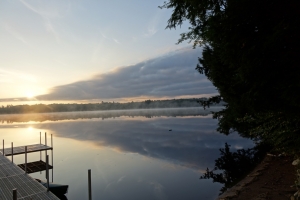 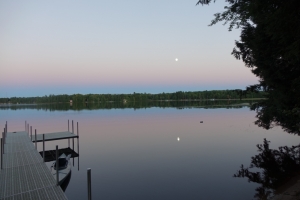 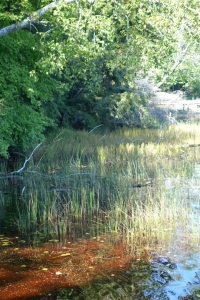 But another part of me knew that there was no better place to heal than at the lake where the quiet woods and calm waters coupled with the love of family allowed me to endure one day at a time. Chronic illness is not for the feint hearted and I am a warrior. My fighting spirit is back; I am ready for the next battle.