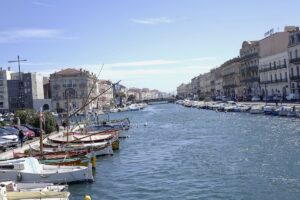 Living in Switzerland, all of Europe beckons from our backdoor, but any travel with my bad back remains challenging. So for our vacation, we narrowed our choice to a short (by American standards) four and half hour drive to discover Occitanie Region, a gem in south central France.

We booked an Airbnb in Sète, a fishing port on the Mediterranean Sea and headed south. I settled in my “crib” folded sideways knees tucked to chin on my yoga mat in the back seat.

As he drove, my live in French chauffeur/chef and guide gave me a brief history and geography of the area, known as Languedoc, which referred to langue d’oc today is known as Catalan a language evolved from Vulgar Latin in the Middle Ages around the eastern Pyrénées 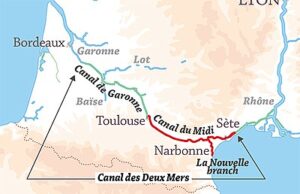 “Occitanie encompasses the Languedoc-Roussillon and Midi-Pyrénées regions, which includes the western Mediterranean coast,” Gérald said. “It stretches from the Rhone valley in the east, to the Spanish border in the south west and lies between the Pyrénées and the Cevennes mountain ranges.” 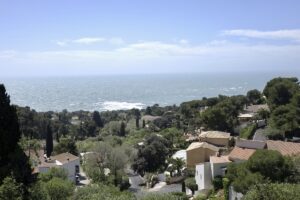 At regular intervals, I popped up to admire the landscape as we crossed France diagonally from Geneva to Sète. Closer to our destination, I saw vineyards, fields, and the arid, rocky Mediterranean hills with scrub vegetation where shepherds tended goats and sheep for making meat and cheese. Wheat, olives, fruits and vegetables are also produced in the area, but it is best known for its wines.

We arrived in Sète – a city built in the 17th century at the mouth of the Canal du Midi on the lower slopes of the isolated Mont Saint-Clair, a hill between the sea and the large marshy Thau Lagoon. Touted as Venice of Languedoc, a network of canals intersects Sète, the town with the lagoon, the docks, and the harbor basins. 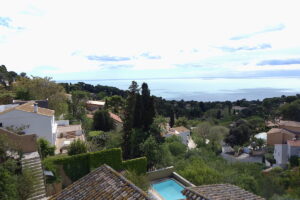 Sète is also known for its fierce winds; we nearly blew off the cliff while watching surfers ride the waves before the storm.

Over the week, we would break our Fitbit personal bests climbing up to our nest, a flat overlooking the sea perched high above the harbor on the Mont Saint Clair where homes clung to the hillside like in Santa Monica. A must see chapel of Notre Dame de la Salette, requires a hike up the hill (400 steps, rising 183 metres) but the views from the top of city and the Etang de Thau promised to be stunning. 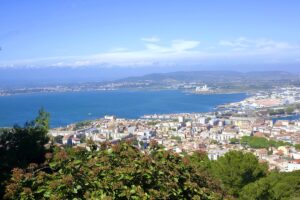 High above the gritty working port, we overlooked the red tile rooftops and admired the restless sea. We felt we’d found the best spot in town to discover the city and surroundings. That evening while winds rattled our shutters, and cicadas serenaded us to sleep, we couldn’t wait to throw open our shutters on a new day and begin exploring.