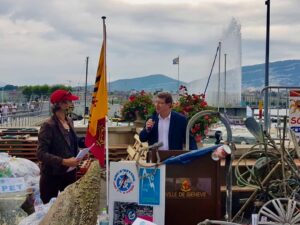 From a childhood growing up in a river town, to summers spent on a Wisconsin lake, to weekends of young adulthood walking Normand beaches to raising a family in a Switzerland with a view of Lake Geneva, no matter where I have lived, water has been my solace bringing comfort, inspiration and peace.

When you are lucky enough to grow up near water you learn to never take it for granted. We were raised with an appreciation of our lakes, rivers and seas. Even as kids we walked around Summit Lake picking up discarded beer cans to take to the local dump. 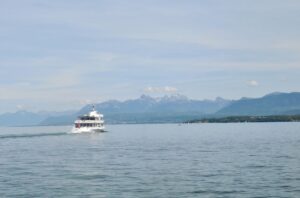 Now every morning when I see my jaw dropping view of Lake Geneva surrounded by snow capped Mt Blanc, I feel blessed. Lake Geneva, on the north side of Alps nestled between France and Switzerland, is the largest lake on the Rhone River and one of the largest lake in western Europe (It’s northern shore is 95 km (59 mi), the southern shore 72 km (45 mi) in length)

A pearl of the region, Lake Geneva is of indescribable beauty, so for me it is hard to imagine why anyone would carelessly pollute this national treasure.

As part of Global Day of garbage clean up, my husband volunteered to join Aqua Diving’s club in their 28th year of cleaning only a mile long shoreline in Geneva. This year, due to the pandemic, participation was limited to 150 people in each region ,but over 1000 people helped out across the nation. 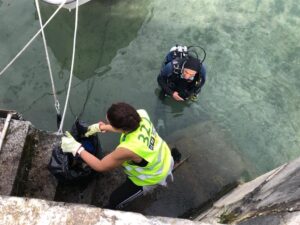 Wearing masks and gloves volunteers lined the shore of Lake Geneva’s right bank. Divers hauled mesh bags filled with champagne bottles, beer cans, plastic waste and handed them to strong workers like my husband who dragged them up on shore and sorted them into categories of waste.

“How was it?” I asked when he came home six hours later.

“Exhausting,” he said as he collapsed on the couch, “and disgusting”. Divers found discarded bikes, tires, wagons, weapons and even an entire grill. Last year they hauled 1.5 tons; this year we collected twice the amount.” 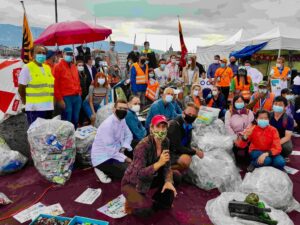 In the 1980s the lake was too polluted with waste and chemicals to swim in, so a French- Swiss transnational effort was implemented. Today water-treatment plants recycle waste water around the lake; now the water is almost too clean because there is not enough nutrients going into the lake for the fish to grow. That hasn’t stopped human littering.

Yet even in Switzerland, a pristine country where citizens value cleanliness, people still discard trash everywhere including into lakes and rivers.

I grew up appreciating our natural resources and water is one of the most precious ones.

How can anyone spoil water that we are so lucky to have access to? I love the taste of water, the feel of water, the sound of water rushing over rocks and ocean tides lapping on the shores. I adore the sight of water reflecting in the shimmering sun and changing colors with the winds.

“Every piece of litter discarded carelessly” Gerald laments “eventually ends up in our rivers, lakes and seas.”

What can you do to tidy up the bodies of water near you?