Dancing down memory lane through my eclectic collection of music, I revisit my past. When I was a kid, my sisters spend babysitting money on clothes, I saved my pennies to buy the latest Marvin Gaye album. Remember the old vinyl?

From turn tables, to Walkmans, to boom boxes, from albums to tapes to CDs, all replaced today by iPhones, blue tooth, sound box. Who could ever forget the old juke box? The delivery system may change, but no one can replace the hits of the 60s, 70s and 80s.

Anyone else foolishly carry their life halfway around the world in a suitcase filled with mixed tapes?

Remember these artists? Teddy Pendergrass, Bill Withers, Grover Washington, Jr., Barry White, George Benson. How about the Temptations, the Supremes, the Isley Brothers? Can anyone surpass the smooth groove of Motown’s stars?

While I chased my hoop dreams, a bouncing ball became the background beat of my growing up years. Has any other game matched so well to music?

From my Illinois State University warm up songs like Le Freak C’est Chic and Give Me The Night, rhythm fueled my basketball dreams. My boom box followed me to French, German and Swiss sports halls.

My daughter laughs when she reminisced about how we used to dance around the living room in Paris to Madonna’s Papa Don’t Preach.

“Mom did you ever questioned if it was appropriate to be singing about teenage pregnancy to a 7-year-old?”

Oh how we loved Kelly Rowland before and after Destiny’s Child split up. 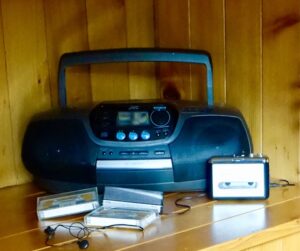 My portable stereophonic sound system came to Europe. Each squad I played on or coached selected favorite warm up songs that became part of their identity. My tape collection included American soul, German rock, French pop. Listening to old tunes flooded me with memories me of players and coaches, friends and places.

During my coaching days in Paris and then in Geneva, Switzerland, athletes made me special CDs for each season. Later generations set up play lists on iPhones. Each summer in the states, my friend sent me off with homemade mixed tapes and introduced me to female vocalists like Patti LaBelle and Anita Baker.

Influenced by friends on my journey, my best friend Phil taught me how to play guitar, a boyfriend in DC added rock n roll to my repertoire, I learned a bit of jazz from a French musician in Paris and folk songs from German buddies. The souvenirs of places, people and languages filled me with a warm glow of mellow vibes. 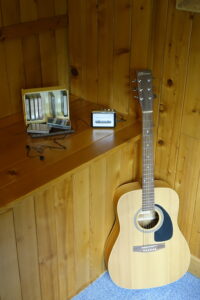 To relearn how to play guitar after my accident, I needed to listen to lessons I had preserved on “antique cassettes”. I ordered a Walkman on Amazon. Stock depleted! I was not the only one reliving musical flashbacks.

When my Walkman arrived in the mail, I felt like a kid at Christmas, but it took a half of day to figure out how to make sound come out of it. MP3 players? Have I been under a rock? What is a MP3 player?

Strolling along with my Walkman, I imitate the motion of dribbling a ball between my legs, spinning, and feigning a jump shot, remembering when my limbs moved effortlessly and my mind wandered aimlessly filled with dreams.

Favorite songs soothe the pain from injury, illness, and heartache.

Music magically transports us back in time and inspires us to keep moving forward.