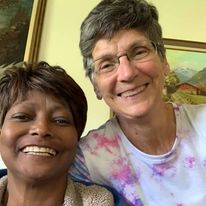 Back in Switzerland, still mourning my dad’s death, I weep for the loss of my friend Frannie. If I could attend Fran’s funeral service today, I would stand up and say what we all know, “Every family, every team, every community needs a Frannie. Her life was a gift to mankind.”

Frannie with her long wing span and big hands enfolded us all in her arms. Tall and graceful with a charismatic smile, Fran could have been a runway model, instead she bestowed inner beauty, strolling the streets of Sterling spreading her love. During her career as a social worker in her home town, she saved lives.

Born on May 17, 1960 the daughter of Jessie and Barbara (Hereford) Smith, Frances “Fran” Marie Smith-Riney, died 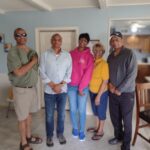 September 13, 2022. She left behind 2 daughters, a son, 2 foster sons, 2 stepsons, 1 step daughter, 18 grandchildren, several nieces and nephews, one sister, three brothers and hundreds of friends, who would swear they were somehow related too.

“Fran skipped into 4th grade with an engaging grin, head held high, taller and darker than any of the other children,” one of her classmates recounted. “It’s as if she was saying even back then `C’mon, we’re in this together, let’s laugh and party and learn to get along.” 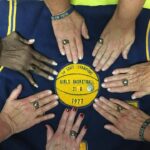 She was a catalyst uniting people from every race, ethnicity and walk of life. 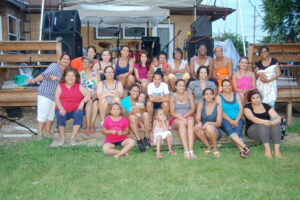 Whether planning a reunion for her 1978 high school class, a 40th anniversary celebration for her 1st state championship basketball team, or a Herford - Smith family gathering that included all of Wallace Street too, Fran connected everybody.

Three years my junior, I considered her my little sister, but she ended up more often looking after me. As center on my basketball team her freshman years, she cleared the lane, so I could drive the baseline at Sterling High School and Illinois State University. Though I moved to Europe; she settled in Sterling, so I saw her when I visited my folks.

The Smith and McKinzie households were intricately intertwined at a time in US history when blacks and whites lived on opposite sides of the train track in small town America. Through education, friendship and teamwork, we built bridges in our community and broke barriers.

My dad coached and taught Frannie and her older brothers at SHS; her brother, Phil, coached me. Together we started the first girls basketball camp in northern Illinois. Over time it was hard to distinguish where one lesson ended and another began, but together we shattered gender and racial stereotypes. 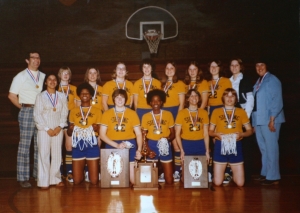 champions, coached by my dad and her brother.

A month ago, Phil, like a second son, spoke at a my father’s Memorial Service sharing stories about his former teacher, coach, colleague, mentor and friend for nearly 60 years.

“I am sorry I cannot be there attend Papa Mac’s Celebration of Life,” Fran texted us at that time from her hospital bed, “but he knew I loved him and he loved me, so we're all good.”

No words can capture what Frannie meant to so many. To me, she was a loyal little sister, an everlasting friend, a basketball buddy, a part of my history, a piece of my heart.

I loved you Frannie; you loved me. 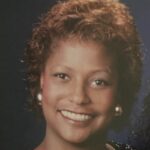 So we’re all good too.

But I will always miss your hugs.