How do I survive autumn stuck in an unheated, mountain chalet the size of a doll house? I scoot out the door and head for the meadows to hang with the cows.

Cows are sacred in Switzerland. They are so revered that every year they get invited to summer camp in the Swiss Jura and Alps. Up in the mountains, the grass is greener offering a smorgasbord of over a hundred different herbs and grasses.

According to the Federal Office for Agriculture, 270,000 cows march from their valley farms to the mountains every summer, only to hike back down again in autumn. 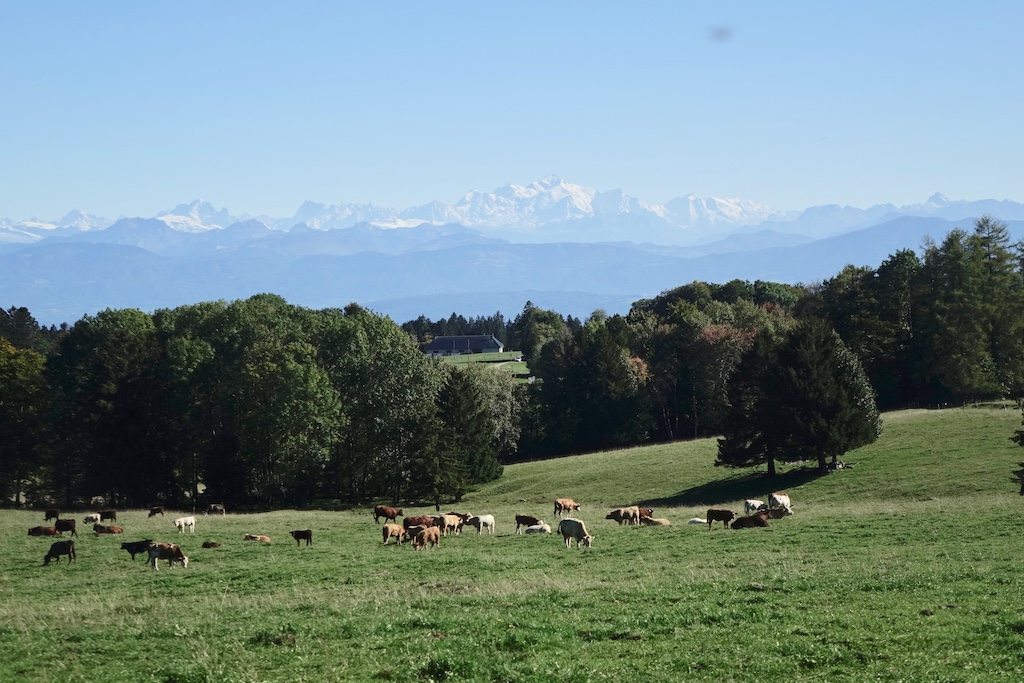 Cows make good neighbors. While their giant cowbells jangle with a comforting ring, they graze in mountain pastures creating that postcard alpine landscape that is so much a part of Swiss heritage.

Dairy farmers herd their cattle high with enticing incentives. They make better money from the 4,000 tons of aromatic “Alp cheese” produced annually from the milk of their livestock. The government also rewards farmers with a subsidy of around CHF 400 ($412) per cow to take their cattle up the mountain each summer.

Every year the desalpe draws crowds in the villages. This year from our window, we watched herds, decorated in flowered wreaths, parade down “main street,” the highway through La Givrine Mountain pass connecting France and Switzerland. Unfortunately, rain spoiled the mood and the cows misbehaved by breaking line to munch a last bite of grass before returning to the valley. 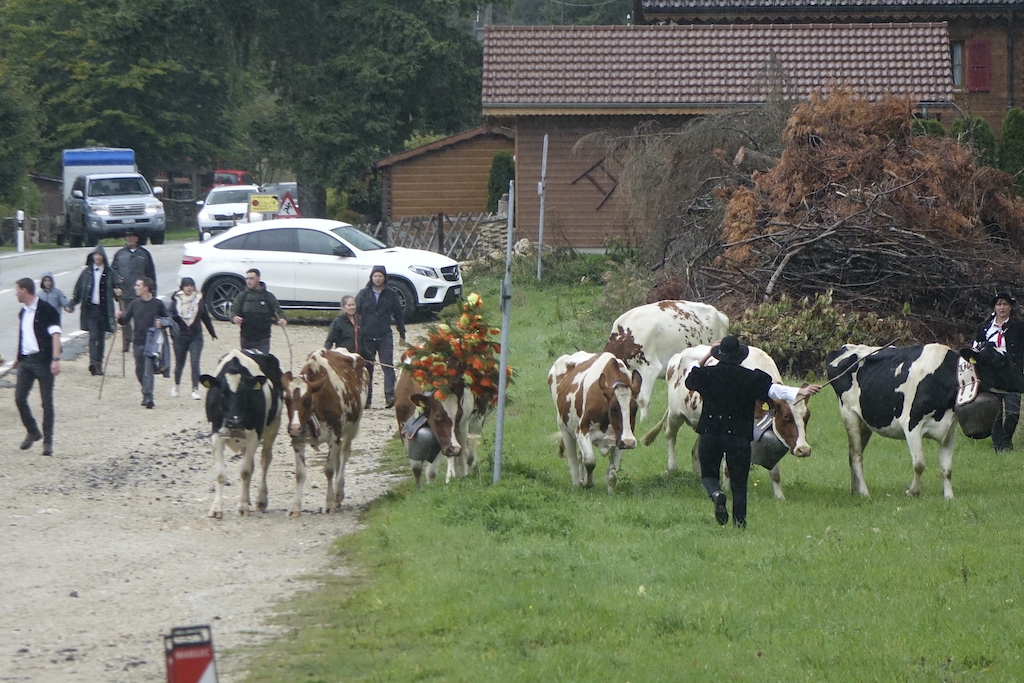 I thought I was ultra fit from hiking up and down, but those Swiss cows have me beat. For their journey in our Jura region, they climb about 600 meters (1,900 feet) and cover 16.3 kilometers (10.1 miles) or more on steep, serpentine trails. In the Alps, some go twice as high. 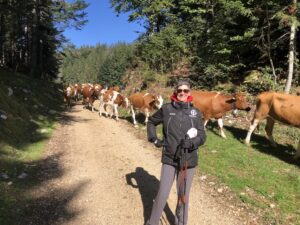 Tourists would be surprised to see cows meandering freely from one meadow to the next without enclosures. Cows have the priority. Hikers must heed way. Accidents rarely occur, as long as walkers don’t bother the animals or step between a mother and her calf.

In some areas, signs warn “Beware of Bulls.”

On one occasion, on one of our favorite walks, we faced off with an angry bull protecting his free roaming herd of mama cows and their newly born calves.

The beast squared off in front of us, snorting and swinging his giant balls, so we turned around and hightailed it back to the village.

The next day, we stopped a farmer to ask, “What should we do if we come cross a bull on the path?”

“Usually they are used to people, “ he told us. “For 5 months every summer, my wife and I come up here with our herd. In 25 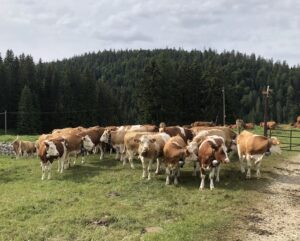 years, we have never had one incident or complaint, but you never know for sure.”

That said, the animals can be intimidating.

Later on that same day, a herd of cows clustered in front of the gate we had to cross to get out. Like the farmer suggested, my fearless hubby prodded the cattle out of our way with my walking stick. Then we walked through the epic stone fence to reach the path.

But when I turned around, a fierce line of bell-clanging cows stood shoulder to should, glaring at us like an NFL front line.

Most of the time though, the cows are so tame, they graciously pose for photos and make me feel like a cow whisperer. 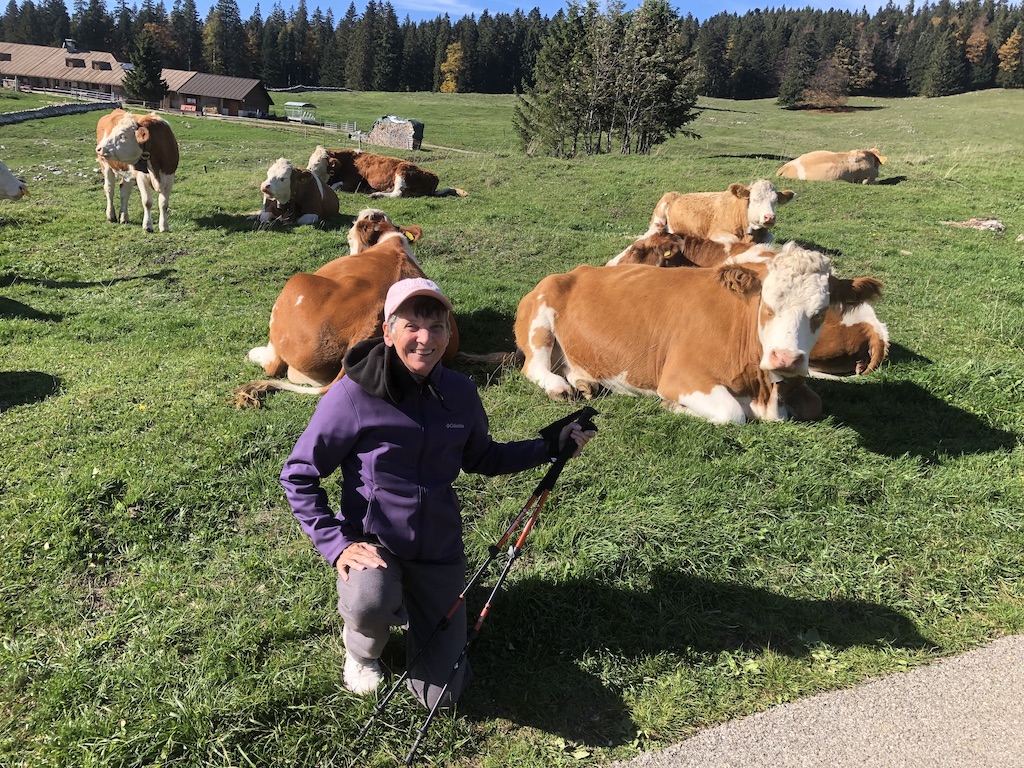