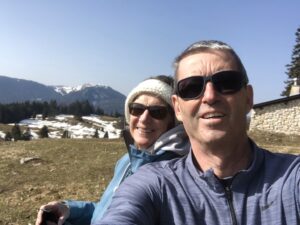 This is the second year anniversary of my death. Only I lived. How do you process a near death experience, when you realized you could have, should have, would have died? Without the miracle of emergency helicopter transport, highly skilled neurosurgeons and endless encouragement of therapists, family and friends, I wouldn’t be here.

I feel guilty. Why am I still here when so many other younger, brighter, better people have died so senselessly in accidents, illness, war, COVID and other catastrophes?

I must use my time to do something meaningful for others. Why else are we here on earth if not help our fellow mankind? On April 10, 2020, I had an accident from which I am still recovering; but I had already lived over 6 decades.

A former student’s battle back from brain injury was eerily similar, but so much worse. Gordon was only 13 years old when he hit his head in a tragic ski accident. He spent months in a coma in Grenoble, France and then many more recovering in a children’s rehabilitation hospital in Zurich, Switzerland. He eventually returned to school. Now he is turning his tragedy into inspiration for other kids.

I can relate to every scene of Gordon’s honestly raw documentary as I relived memories of my hours of therapy. I stumbled down the hallways of my rehab center gripping wall bars, I repeated numbers and letters on flash cards and molded lumps of clay to regain dexterity in my fingers. I learned to lift my foot, swing my arm, hold utensils. 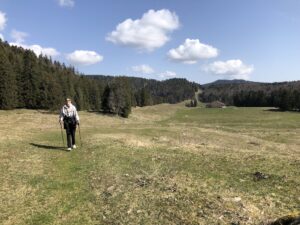 I scowled at my occupational therapist when she tried to reteach me things I’d learned as a two-year-old like wash my face, brush my teeth, wipe my butt.

In the basement hallway of the hospital I paced, stopping in front of the door labeled “Morgue,” giving thanks for my great fortune. I could be dead. I pushed through exhaustion, humiliation and hopelessness to heal.

In the aftermath of a brain injury, I raced against time to maximize a phenomena known as neuroplasticity. One can retrain the brain using different neurons to compensate for those severed in the brain from trauma.

After hours of occupational therapy, physical therapy, speech therapy and neuropsychology, I collapsed in bed falling asleep only to be woken minutes later by another therapist to take me to my afternoon sessions. I wanted to scream, “Go away!” 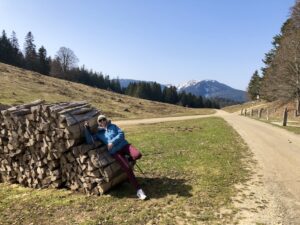 Two years later, I can walk for miles, talk for hours and swim again. I must appreciate how far I have come and accept that my rehabilitation journey is ongoing with therapy, treatment, and exercise until recovery becomes my way of life.

Gordon, an inspiring teenage boy, who came back from the brink summed it up when he recounts what he learned on his unexpected journey.

“There is always something to be grateful for no matter how unlikely. Beauty surrounds us, but we have to CHOSE to want to see it.”

“Never compare yourself to others. Each person has their own journey.”

“Life is full of challenges; it is not always meant to be easy. It is not what happens to us; it is how we chose to respond to it. Goals happen only when we are challenged and this is opportunity.”

Before he even took his first steps, Gordon set a new goal - walk over 2000 meters up the Schilthorn Mountain in Switzerland.

Here is his story.