During media interviews and community speeches culminating with my keynote speech at the NCAA Final Four Banquet, I held center stage and had a chance to share the story of the pioneers. Here are my top ten memories riding the emotional roller coaster of my first Final Four.

1. My former Illinois State University coach, Jill Hutchison, whom I hadn’t seen in 35 years drove 10 hours to surprise me. From the front row at the banquet, she gave me the thumbs up and just like driving the baseline long ago, I nailed the performance under her benevolent eye.

2. My daughter, the first doctor in the family, illustrated the true evolution of women’s rights. “In 1970, less than 8% of physicians were women,” Nathalie said in her speech. “My med school class at the University of Minnesota was about 50% female. I’m privileged to have grown up at a time where my gender was not a major handicap to pursuing my dreams, and Title IX played a big part in changing things for the better.”

3. Young athletes, who never fathomed that there was day when girls had to sit on the sideline, sat up straight and listened when I talked about the trials pioneers endured to reach the pinnacle of our women’s NCAA Final Four.

4. The NCAA Chair, Dave Martin told me, “Awesome speech!” Better yet, he promised to pass my book, Home Sweet Hardwood, on to the next generation, his daughter

5. Beth Ball, the CEO of Women’s Basketball Coaching Association, echoed my words and gave a nod to Jill, cofounder and 1st President of the WBCA and to the late Betty Jayne, its first CEO. I felt the profound impact of being a part of history.

6. Shirley Egner, DIII Wisconsin’s winningest coach, a rival back in my college days, became an ally when my daughter played for her at UWSP. The Final Four cemented our friendship.

7. My book was displayed in a university bookstore right along with the Pointer T-shirts, baseball caps and college apparel.

8. I saw firsthand female basketball players dive for loose balls, bump under the boards, and knock down jumpers while fans applauded every action; male peers cheered the loudest.

9. I was interviewed on Wisconsin Public Radio Route 51 to the background beat of Sweet Georgia Brown. That was same song the jazz band played when I was a child watching the boy’s basketball team warm up, praying one day girls could play, too.

10. The people who hear me chat all the time on the phone and during holidays – my sisters, brother-in-law, and kids – traveled a combined 2200 miles to hear me speak. My son, a history major, nodded in approval and told me I got the facts right. Now how cool is that? 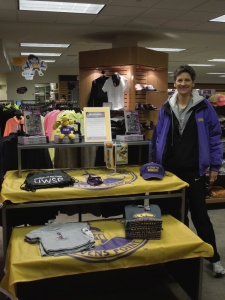 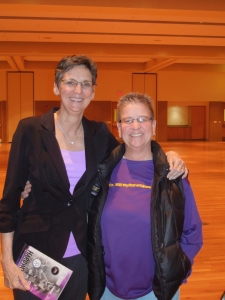 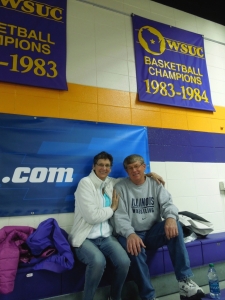 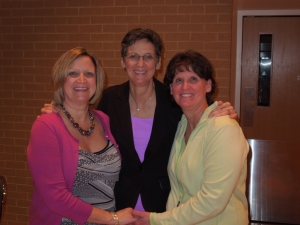 A special shout out to UWSP’s director of general education and history professor, Nancy LoPatin-Lummis for making it happen. While watching her 12-year-old daughter’s basketball game, Nancy realized that had she wanted to play when she was child, her dad would have to court and fight for the right to participate. Nancy wanted her daughter to appreciate the opportunities available to girls today. Her epiphany inspired UWSP Title IX and Access to Opportunity lecture series celebrating the evolution of women’s rights leading up to their hosting of the DIII Final Four Basketball Tournament.

After a week of celebration where I felt like I had landed in basketball heaven, I flew back to Switzerland where no one had heard of March Madness. I went into withdrawal because I could no longer fill in brackets, follow teams, and watch games. But, hey, only another 300 some days until the next Big Dance.